Yesterday Was A Huge Day 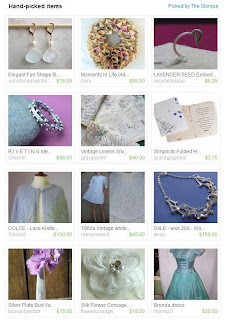 First, one of my products was on the front page of etsy.com! Not only that, but the item was hand-picked by the company from thousands of wedding-related products. Mine is at the top of the page, at the right.
Apparently, my snapshot of the sprout coming out of the paper was eye-catching.

Taking that picture was probably the single best thing I have done for my little paper-making operation because it provides proof that the seeded cards do grow. Since I uploaded that picture to my store listings, those plantable cards have flown off the shelf so quickly that I have had to stay up late to label, package, and address shipments. I also generated three custom orders from it. 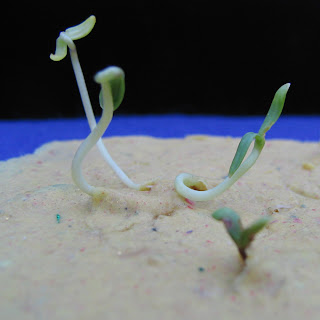 My inventory quickly depleted, but I worked hard over the weekend making more so I have plenty of cards to put back in stock throughout the coming weeks now that I'm on the map.

I took more snapshots of the sprouts coming out of the paper I make and will be adding them so I have variety in the the cover shots.

Second, yesterday was Her Royal Highness the Newfoundland's second birthday. We really screwed the pooch on this one because she neither got a burger, nor a swim. In fact, I don't even think she got a proper walk. However, the day before, I let her off the leash 20 feet earlier than I usually do when we get to campus. She loves running around on the quad chasing sticks. Normally, she stays on the leash until after we cross the bridge going over the campus creek, but yesterday — I let her loose before the bridge. True to her breed, she ran straight for the water, dove in and looked at us standing on the bridge looking back at her, chest high with a breed-typical goofy newfie expression — clearly a hog in mud. She willingly left the creek, most likely because she couldn't get proper swim in a foot of water, and later found and brought home a lacrosse ball — an early birthday 'present.'

* * * * * *
Finally as a follow-up to Monday's sock story, the authorities around here have identified a new suspect in the mystery of the olive green sock disappearance. The individual bears a striking resemblance to Mr. Field Notes. Authorities are close to getting a confession.
Posted by Field Notes at 10:11 AM

Congrats on the front page!

I saw you on the front page! That photo must have gotten so many clicks, it's so interesting looking and mysterious until you read what it is! Congrats to you.

Congrats on the front page! I just found your blog and absolutely love it!

Have a fabulous day:)

Congratulations!! I saw these when you posted in promotions the other day. It must be an awesome feeling :-)

congrats on the front page!!! thats fantastic. you deserve it your pieces are beautiful. good luck!

I love the new sprout picture! I don't know what it is about them, but I find those little sprouts in both pics so compelling. You stumbled upon an excellent little marketing tool. :) I'm very happy for your and your plantable paper success! COngrats on the front page, too!

That is great! Congrats!

Congrats on the front page! Your photo of the sprout is fantastic, and it's neat to see that your seeded paper really does sprout. Cool. :)

Congrats on the front page! I saw your new avatar the other day and visited your shop to check it out. What a wonderful, beautiful photo! These are going to lead to fantastic sales for you. Nicely done!

Congratulations! its so well deserved, what a cool product you've come up with!

Congrats! That is so awesome for you!

congrats. It is such an awesome photo and excellent concept!

AND you've been tagged :D
http://beadsinthebelfry.blogspot.com/2008/03/tag-im-it.html

That is so great! I saw you on there and thought that making things from seeded paper was so great! It definitely caught MY eye! :O)
And it's awesome to know it truly works!
Congratulations!

Yaaayyyy for the front page!

Congrats on the front page!! Man, it is great to see a right AND left brained person kickin' butt and taking names! :) Those pups are darn cute, too! :)

congratulations! those cards are really quite neat. :)

Congrats hun!!! I'm so happy this happened to you. That's fantastic, and a great product.

Congrats on the front page! I love your little sprouts. I remember when one of the big charities (MoD maybe) did that one year and I bought a bunch of them. All but one grew but we really had fun with them. Then my son's teacher tried it with her class and they had a cute little poem that went with the recycled paper card. We got them for Mother's Day and mine started to grow then bit the dust when my cat got at it!
I hope you get restocked soon!

Hurray for you! And making the world more cheery with flowers!

Congratulations on the Front Page...your photography is spectacular.

Those are awesome! I'm glad you're doing so well with them.

Congratulations on the front page! I love your seed cards, so unique. Happy Birthday to your pup! Glad to hear others spoil their dogs on their birthdays.

congratulations on being on the front page!
The seeds in the paper is a great idea!
Hm,but now I cannot make it because I would becopying you :D
Anyway,I only made paper twice or three times in my life but I would like to get better. Lovely work!!!