Imagine that while taking a test — which you're doing finally because it is the only time you get to actually think straight because it is finally quiet and you're able to take the test — you are having a sensitive part of your anatomy pulled, tugged, hit, squeezed and bitten.

This is why mamas need a Mother's Day, and back rubs, and meals cooked for them, and houses cleaned, and gift certificates for spa days! Believe me, I am looking forward to the day when mother's efforts are recognized. Part of me wants to just spend the day in bed sleeping without having to do anything baby related. But the truth is, I would miss her.

For the past several months now, my morning routine has been to get up and work around 8am and finish sometimes around noon. I don't use child care; this is partly out of personal choice but also a little bit of necessity. There just isn't a good reason, or a good place to take her if I wanted someone else to watch her for a few hours while I work, so I work and take care of her at the same time.

Usually this isn't a problem, I think, because I have years of practice at multi-tasking and being over-extended and am good at it, but every once in a while — by this I mean once every 2 months — she becomes a nearly unbearable handful.

I think that right now this is related to her being in full on teething mode. She sprouted her first tooth 2 weeks ago. She's a classically 'easy' baby temperament-wise so it really stands out when she fusses. 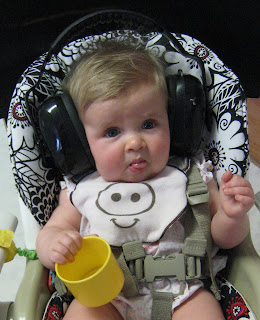 And, OMG, it got so bad one day I put on my gun shooting ear muffs. I use them when I run the blender during papermaking. And sometimes I put them on her when I have to have her nearby while I make paper. I felt bad putting them on just to drown out her fussing, but I just could not work, on a deadline, with all the fussing. I had tried everything else up until that point.

And an amazing thing happened when I put them on.

The distraction stopped her fussing immediately.

She stayed quiet for quite a good amount of time while she studied my new appearance. Phew! What luck. The dogs have been helpful distractions for her, but they're not reliable. They don't perform on command. And I sympathize with her teething discomfort. When I have had endo-related pain I can be a real grump too.

I shall have to log this general 'distraction technique' to memory and bust out other forms of distraction as needed later. Working motherhood is definitely an exercise in creative problem-solving on the fly.
Posted by Field Notes at 8:56 AM 7 comments: