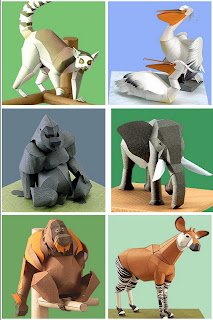 Japan is famous for paper, but did you also know Japan produces some of the coolest patterns for making your own paper sculptures? I didn't until I found a kit to make a mountain gorilla in a nifty store in Japan. Today I stumbled on a website, sponsored by Yamaha (as in Yamaha Motors) that offers the patterns and instructions for FREE! All you need to do is download the PDFs, print, cut and assemble.

Don't like animals? No problem - they've got patterns for engines and whole motorcycles too.

I love what the company has to say about why they're doing this:
"All work and no play would make for a very dull company in any area of business, but when your products deliver as much excitement as ours, it seems only right to support them with an equally exciting range of entertainment options."

What a perfect craft project to team up on with a bored 10-year old!
Posted by Field Notes at 6:06 PM 6 comments:

We have more snow now than I have ever seen here before. We must have 18 inches piled high on our back porch roof and every morning there has been more! The dogs are living it up. They beg and cry to go outside to play in the snow. Then they come inside.. after an eternity.. and then ten minutes later, literally, they are at the back door asking to go out again. Crazy newfs! They really, really love snow. This afternoon they actually begged and cried for me to throw snowballs at them. Katy loves to try to catch them in the air and Yuki just wants to have them hit her face. I drenched her in snow and she kept coming at me asking for more. If only I had time to post some video. Until then, here's Katy newfing it up. 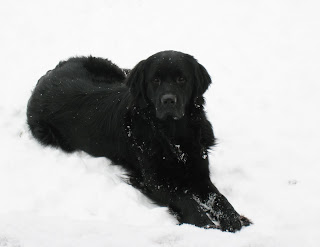 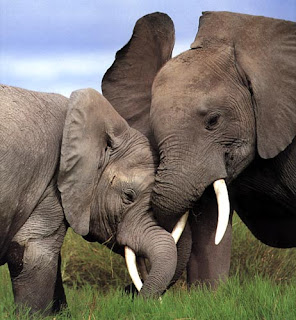 More often than not, a life in captivity is associated with longevity. Not so for elephants.

A new study has found that wild elephants outlive their captive counterparts — dramatically so.
Researchers found that the life span for wild African elephants in Kenya's Amboseli National Park is about 56 years. However for elephants kept in European zoos it was just 17 years.

According to the researcher, Georgia Mason of the University of Guelph in Canada, there are about 1,200 elephants in zoos. Half live in European zoos. The research involved primarily female elephants because they make up 80 percent of the zoo population.

Asked why captive elephants don't live as long, she noted that zoos usually lack large grazing areas and the elephants are often either alone or with only one or two other elephants that are unrelated. This marks a significant difference compared with elephant lifestyles in the wild where they roam large grassy areas and live in groups of 8-12 relatives.

In addition to the shorter lifespan in captivity, zoo elephants also have a 2-3 times higher infant mortality rate. Mason isn't sure why.

I have to admit that although I love going to zoos to see the monkeys and apes, who often have good enough habitats that I don't leave with a sick taste in my mouth, I have a totally different experience viewing some other animals. The big cats, bears and elephants are among the worst kept critters in zoos in my observation. Their habitats never seem to be adequate for maintaining their mental health, let alone their physical health. I think it's just their greater need to roam that is responsible. Perhaps primates can much more easily adapt to a more sedentary life.
Posted by Field Notes at 11:06 AM 5 comments:

Heartaches are heroes when their pockets are full

One of the classic studies from Evolutionary Psychology, one that gets mentioned in all the textbooks and is known to all students of the field, perfectly illustrates a line from the Rosanne Cash song Seven Year Ache: Heartaches are heroes when their pockets are full.

It's best known as the "Burger King study." The researcher, John Marshall Townsend, an anthropology professor at Syracuse University, dressed the same man in two different ways. One was a Burger King uniform, and the other was a white shirt with nice tie and watch and a navy blazer. He had women look a photo of the man and evaluate to what extent they would: like to have coffee with him, date him, have 'uncommitted sex' with him (a favorite question of EP), have a serious involvement with him, have a serious sexual relationship, and marry him (another favorite EP question). Unsurprisingly, women across the board rated the nicely dressed man higher.

Perhaps a better song and line to pair with it is ZZ Top's Sharp Dressed Man: Every girl's crazy 'bout a sharp-dressed man.

The real question then becomes why? Why do women prefer a sharp-dressed man. Ah, sure, women want a good provider. But why? The answer depends on who you ask. Ask an evolutionary psychologist and they'll tell you it's because ancestral women who chose men to mate with who showed signs of status and wealth left more offspring than women who were indifferent to wealth. Ask a member of the "Flat Earth Society," what some evolutionary psychologists call women's studies departments, and they'll say it's because women learn to prefer wealthy men because that's what our culture values. I say it's what our culture values for a good reason: Those values helped us thrive as a species.

The need for women to prefer wealthy men has a lot, I think, to do with the ecological conditions women have customarily faced, namely, lower status. Another significant one is having babies that are metabolically costly and also incredibly difficult to care for, compared to other species. Human babies are basically born before they should be. They come out of the womb much less developed and far more dependent on mom than other primate babies, including other great apes, who also have very dependent babies. Human babies require significantly more care and that is made a lot easier with the help of another parent who can provide food, shelter and protection. The higher status the helper, the better fed the baby and the more likely to survive. That's how the theory goes.

There are some feminist evolutionary psychologists who doubt whether that helper actually was a male sexual partner. The other helper (or helpers most likely) could have been a mother, grandmother or other females raising babies cooperatively.

Not for feint of heart: The Guinea Worm 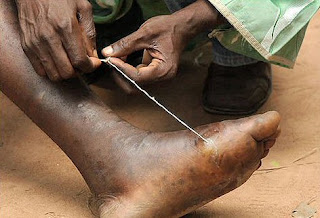 Former President Jimmy Carter's charitable foundation announced today that it looks like the eradication of the guinea worm parasite may soon become the second infection to be eliminated from the world. Smallpox was the first.

I still wouldn't drink the water yet in Mali.

People catch guinea worm from drinking water infected with the parasite, a worm. It grows under people's skin and over the course of a year, the worm can grow 3 feet long. Wow! And, GROSS! Like the bot fly larvae I learned about when I visited Belize years ago, the guinea worm slowly erupts from the skin, literally, growing right out of your arm, leg, foot. Evidently it causes much pain and debilitation but is not usually fatal.

There is no cure or even treatment for the parasite. The only thing you can do is prevent it, or live with it, waiting for it to emerge completely. Ew.

The map below from The Carter Center shows the extent of the parasite.

It all just reminds me how very fortunate we are to have clean, safe drinking water — something lacking in many parts of the world. Even in places like Tunisia, Belize and Guatemala, which were all fairly well developed for tourism, I drank bottled water which was expensive. In Guatemala we figured out pretty quickly that beer was actually cheaper.

You can learn more about the guinea worm and how it's being eradicated here.
Posted by Field Notes at 10:46 AM 5 comments:

Pygmy tarsier, a monkey that defies categorization, not extinct afterall! 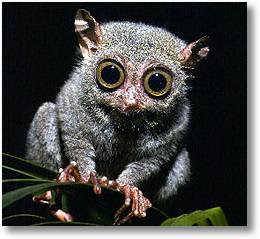 With a tail like a rat, sticky fingers like a gecko, frog-like legs, a head that rotates all the way around like an owl, bat-like ears and the plump face of a baby, the tarsier definitely counts among the most bizarre animals on earth. And it's also a primate! The smallest kind of tarsier was believed to be extinct until it was found last month on the Indonesian island of Sulawesi. 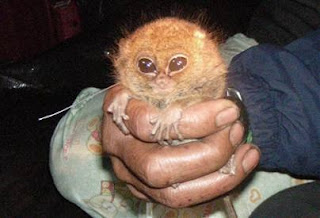 Sometimes called the world's smallest monkey, the pygmy tarsier is neither a monkey nor even the smallest primate. The tiny dwarf lemur of Madagascar gets that honor. And, primatologists say the tarsier falls somewhere between the prosimians (lemurs, busbabies) and monkeys on the evolutionary scale. They are not quite monkeys, but not quite prosimians either. They have qualities of both. One classification system puts them with monkeys, another with prosimians, but yet another gives them a category all their own. I like that one best. A unique creature should gets its own special spot. 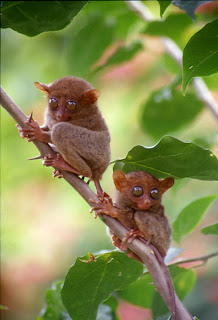 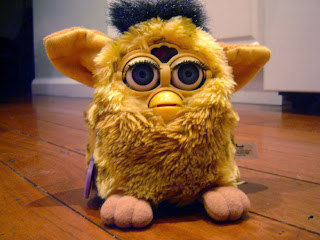 "They always look like they have a perpetual smile on their face, which adds to the attraction," she said in an interview. To me, they look almost exactly like Furbees, that fuzzy, robotic toy that was insanely popular about a decade ago. I think even my grandma had one. 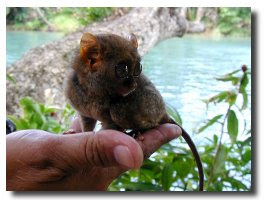 The cute yet enigmatic little primate, neither monkey nor proto-monkey, weighs a mere 2 ounces and eats mostly insects. They are also known to eat snakes.
Posted by Field Notes at 11:24 AM 6 comments: