NY Gov Spitzer: What on earth was the man thinking?

Though lots of great news splashed across the wires today, including one on using a token economy in the workplace to boost productivity (uh - good luck implementing that one without making your staff feel like toddlers) and one on tourists kidnapped in Tunisia (which I am planning to write about, having been there), it was an article that quotes 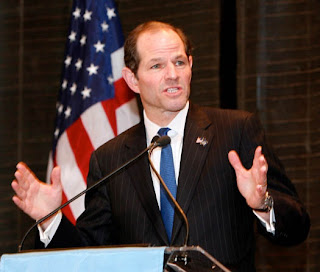 psychoanalysts
explaining why Eliot Spitzer, the governor of New York who got himself a prostitute, that really caught my eye because of how bad it was — or rather how full of crap the psychoanalysts were.

“There’s the psychology of the exception,” said Leon Hoffman, former chairman of the American Psychoanalytic Association’s public information committee. “People in power sometimes feel they can do things that us, mere mortals, are forbidden to do. There’s a sense, as with adolescents, that 'I won’t get caught.'”

Doug Muzzio, professor of public affairs at Baruch College, says Spitzer’s situation could be a case of a deep-seated compulsion or one of simple hubris.

Chicago psychoanalyst Mark Smaller says, “Often the behavior in question is caused by intense anxiety, stress in the workplace or home, or feeling overwhelmed.”

You know what I say? The dude was a horndog who was probably in an unsatisfying marriage or not getting enough sexual gratification at home. Rather than doing the hard work of solving his problems though legitimate means, he took the easy, sleazy path. There's no reason to delve beyond the obvious here.
Posted by Field Notes at 11:40 AM

"an unsatisfying marriage or not getting enough sexual gratification at home"
So, the wife is to blame?

My very unexpert opinion/supposition is that he thought a "normal' affair would leave him open to discovery - emotions and all that can get messy and that going with a high class service like he did the odds of maintaining discretion were increased...of course, he didn't factor in the FBI in this equation...but men thinking with their little brain rarely factor the FBI in... :)

As for other remarks... Sleeping with a prostitute could be caused by many things, but that doesn't mean that it is true in this case, and, as you said, somehow everybody looks past the obvious.

It's the guy's fault if the marriage isn't satisfying to him. Ditto for being unsatisfied sexually. It's his responsibility to figure out how to be satisfied.

Seeking sex and companionship outside of marriage is the guy's choice.

Fact is, he screwed around and got caught!

I think he did because he could. Lots of people do, he's just in politics so it's a big deal.

Who knows! The whole situation is bizarre.

If his wife was "holding out"
a) no excuse
b) good for her because who knows what she may have caught!