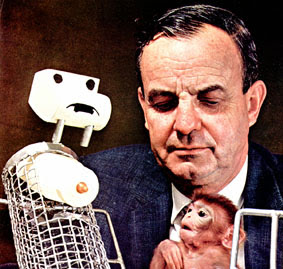 One of my very favorite days in introductory psychology is the day we talk about developmental psychology and attachment. Why? I get to talk about monkeys and Harry Harlow.

As a scientist and a person, he is as interesting as his famous research on cloth vs wire surrogate mothers. The book Love at Goon Park: Harry Harlow and the Science of Affection provides a good summary of attachment research at a level that is easy to understand. It also presents numerous stories about Harry the person. Did you know he wrote poetry? Yep - that's how he took notes for his exams as an undergraduate student! One of his famous papers, The Nature of Love, published in 1958, includes one of his poems. The man may have done some arguably cruel things to the cute little monkeys in the name of science, but he was not a heartless bastard, as some people would have you believe. Both the book and the Nature of Love article are well worth reading. If you click on the Nature of Love link, you get taken to the entire article, poetry included.

His research sparked the science of affection, and if someone had asked me at any point during my graduate career to name the progenitor of my field, I would have been hard pressed to come up with a more appropriate person.

It's crazy how fascinated research academics are with genealogy, but they all want to know who your advisor is, and who they studied under and who they studied under so on all the way back presumably to Wilhelm Wundt. Some university psychologists take great pride in being able to trace their lineage back to the big wigs. I wonder if it's just a psychology thing or endemic to academia.

Academic heritage aside, back in the "good old days," when people thought mothers caused their children to be autistic through improper mothering, Harlow set out to study affection - specifically LOVE. Apparently what sparked his big idea was an observation that monkeys screamed and threw tantrums when the cheesecloths lining their cages were removed for cage cleanings.

Ever try to take a child's favorite teddy away to give it a little cleaning? You'd start to wonder what it is about the teddy that is so appealing. Children, like monkeys, become attached to whatever provides them affection. If a warm, responsive caregiver proves absent, any soft cloth will do. It just won't result in a secure attachment. 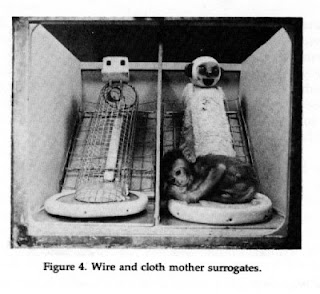 For a secure attachment, infants - human and nonhuman primate alike - need a caregiver who takes care of their needs promptly, appropriately, and reliably. Mess up on any one of those things, and you may get an infant who is insecure, anxious, and primed for screwed up romantic relationships in adulthood.

It's not exactly that cut and dried - for more depth on the subject of attachment, this is a decent primer.

Harlow's experiments showed that infant monkeys bond to whatever is soft and cuddly - even if it is nothing more than some fake fur wrapped around some wire and made to vaguely resemble a primate. At the time, people really thought it was nursing that forged the mother-infant bond. They were partially correct, in that oxytocin "the bonding hormone" is released during breast feeding, but they were also really wrong to discount the importance of touch. One thing I really wish someone (maybe me!) would study is whether oxytocin and massage as well as other forms of touch like grooming are associated.

The classic image from Harlow's research is the one of the poor baby monkey clinging to the cloth surrogate mother and leaning way over to nurse from the wire surrogate that provided nourishment. The sad thing is that although the monkeys in his experiments bonded to the surrogates and were able to be bold and explore on their own in the presence of their "mother," what psychologists call using the caregiver as a "secure base," the monkeys could not form normal socio-sexual relationships in adulthood. They had no clue how to interact with other monkeys and could not dance the delicate dance of nonverbal cues used during mating.

One of the benefits of having a secure attachment style is the ability to read and respond appropriately to others' nonverbal signals - the subtle facial expressions and body postures that play a critical role in courtship and mating. The "good read" link I supplied above points to some really interesting research on this particular subject - and the research uses humans - adult ones in real relationships.

When I show snippets of the old black and white CBS aired footage of Harry Harlow's research in my class, it always stimulates discussion. The biggest battle I ever face is how to keep the conversation on the subject of attachment behaviors rather than the ethics of primate research. If my students only knew about Harlow's "rape rack" I'd have more than a few them going berserk!

Here's some YouTube footage of Harry Harlow and his monkeys
(See if you can spot the monkey sucking its thumb):

fantastic thread and obviously one of my favourite topics! I think it also highlights issues relating to primary caregivers and placing children in nurseries and playgroups, excellent!

I used to think that Harry Harlow was evil, until I read Love in Goon Park. then I realized that, until his work, people didn't believe that love mattered -- that mothering mattered and that we all need to be touched. I wonder if today, we're losing or forgetting what Harlow taught. I don't think it's necessarily bad to put children in child care or nurseries, but I agree with Charlie that we should be more aware of the nurturing these babies and young children. I wonder whether, in this age of multi tasking parents, overworked families and family unfriendly workplaces, if we make be raising a generation of children who don't know how to bond.
Susan Kuchinskas, Hug the Monkey

That's something I wonder about too - the lack of touch in our American culture.

We're already so touch averse compared with other cultures that when I see/hear stories about preschool or elementary teachers getting in trouble for hugging a child (!) that's when I think something is fundamentally wrong the system.

And that's not to mention not being able to touch people at work... how many work places offer 15 minute massages at the work place for stressed employees?

Giving and receiving affection can really help with stress - and productivity.

I understand wanting to CYA with regard to sexual harassment and child molestation, but do we really have to bar touch altogether to achieve that?!

This reminds me that I would like to go volunteer to be a baby cuddler at the local hospital...

One of my favorite pop psychology books is "A General Theory of Love" by Thomas Lewis et al. I found his ideas on why we form the types of relationships we do to be quite illuminating. Great topic. I'm on my way to visit the links you included.

Lol, i remember studying this in a psych course...and thinking that Harlow had no heart...I still feel sorry for the poor monkeys but at least we know more about early attachment thanks to him...Great post!!