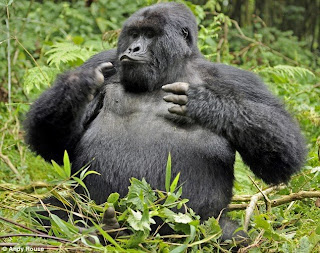 So much for Gorillas in the Mist, these days says a photojournalist, it looks more like gorillas getting pissed — that's British for getting drunk. Evidently the journalist noticed a group of mountain gorillas he visited were enjoying some fermented bamboo shoots a little too much.

By the way, primates seem to love indulging in alcohol and research has found the proportion of sipping simians to tee-totaling ones is about the same as seen in human populations. What's more, alcoholism has been observed to run in families among monkeys just as it does with humans. Researchers contend there's a genetic basis to the propensity to become alcoholic given a booze-indulging environment.

Monkeys on the island of St. Kitts in the Caribbean steal tourists drinks. You can see the results of that in this tourist video:


This video is one I frequently use in class when I talk about zoopharmacology - or animal self-medication.
Posted by Field Notes at 11:07 AM