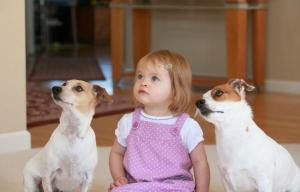 This month's Animal Cognition journal carries a sweet little gem of a study on when babies and dogs understand what it means when adults point. Kids up to age 2 and adult dogs only pay attention to whatever body part is outstretched — be it arm or elbow — and ignore whichever direction the index finger happens to point. But at age 3, kids grasp they're supposed to pay attention to the finger even if it's pointing in the opposite direction of an outstretched elbow. Dogs don't.

I don't know about you, but I know with dogs — and maybe soon I'll find out with really young human kids (?) too — that puppies spend months just sniffing your finger before they understand the whole gestural pointing thing. Both Katy and Yuki were finger sniffers before they looked in the direction of a pointing hand. I didn't keep track of how old they were before they 'got it' but I bet that you can measure a dog's intelligence based on how early during their development they stop sniffing your finger when you point.

The authors of the study conclude that children and dogs show generally similar abilities to understand gestures like pointing and directional glancing because of their shared environment and long history of co-evolution.

Glancing at what you want is a great way to communicate your desires if you can't speak. Yuki just recently figured that out and now looks up at her leash and then at us, repeating the leash-look/human-look sequence a couple of times. Katy goes one step, nah, make that six steps further and backs herself up while whistle-whining and going through the look sequence. Backing up is something I taught her to do early on because she'd lunge and snap at my hand to try to get a thrown toy within an inch of it being released. More often than not, I got chomped instead of having a nice game of fetch. So I taught her to back away — and wait for the throw. It wasn't long before she generalized that to anything she wanted: treats, morning and dinner chow, walks, pats. We joke all the time that when she really, really wants something, she'd back herself right into to the neighbors house if she could.

I know I will have a load of fun observing the three 'kids' interact and learn from each other. I really hope the baby doesn't ape too many things from the dogs! Glancing to indicate what you want — YES! Licking the floor and carrying around rope bones in your mouth — NO.
Posted by Field Notes at 11:34 AM

Actually it takes quite a lot of repetition to get dogs to understand pointing at all. As a species they just don't communicate with each other by using out-stretched appendages (with the exception of the tail, but this doesn't indicate direction among dogs). It takes significant effort on the part of humans to train a dog to follow an out-stretched appendage with their eyes. (This of course does not preclude the training required for kids to cotton on, jus' sayin'.) Incidentally, dogs naturally follow the direction that a person's feet or torso is pointing as this is a universal indicator of which direction a body will be headed next.

Don't forget- When you feed the dogs, the baby (once of age to crawl) is sure to sample the kibble. It is a right of passage....Ewww!

Peeing on trees-- NO.

Hadn't even thought of that one, UR! Now that you mention it, I can totally see some peeing on bushes if I don't watch out.

There's a wonderful National Geographic DVD that came out a couple of years ago which focuses on canine cognition. It's called "Dog Genius," and one of the topics they touch on is pointing. Another concept that they discuss is fast mapping. Most children begin to fast map around 2 or 3, and studies are showing that dogs may also use this learning technique. Endlessly fascinating...

My cats seem to get pointing - at least when it comes to pointing out where the treats are! If I put down a few of their favorite treats, and they are not right in front of their noses, I point and say "Treat." Now that took more than one attempt, but it didn't take long for them to figure it out.