Toto is Known For Toilets 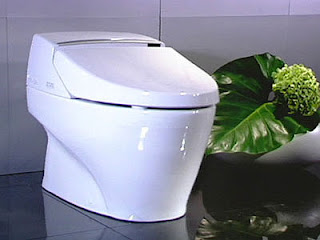 I'm finding my groove with the paper making enterprise now so I have developed a little routine. I make 8 sheets before 10 am, then watch The View. While watching, I do a blog post, then hit etsy. Mr. Field Notes comes home for lunch, then I referee Fight Club and make another set of 8 sheets in the afternoon. Somewhere in there I prep photos in Photoshop for adding items to my store. Now I've joined Facebook at the request of my sorority sisters. Yes, I'm a sorority girl! Anyhow, yet another thing that takes up time GAH!!!!

So the hot topic conversation I walked in on after cleaning up my paper making area this morning was TOILETS - and specifically Toto brand toilets. I have watched The View in the mornings off and on for years. I really like the hot topic bickering and even though I liked Rosie as the host the best, Whoopie is growing on me. "Toto is known for toilets," she asserted this morning. Damn right they are. And I know this brand! They are all over Japan. I never saw another brand there.

So what's so special about Toto toilets?

First, you have to understand that Japanese toilets are just different. And, we have to distinguish between the squat toilets and the "western" ones. Toto makes both, but Whoopie & Co. were not talking up the squat ones. Although they can be messier, they do have merits. You'd just never see one in an American house. Wow that would be a real shocker! Anyhow, if you've never used a squat toilet before, you haven't lived.

Squat toilets are actually pretty cool, and if you are going to have to hover over a toilet seat anyway because it's "dirty" then I can tell you from personal experience that hovering over a squat toilet is much, much more comfortable. You have to pay attention though, because if you don't direct your stream just right, you'll pee on your shoes. There's a technique to aiming too - otherwise you'll splatter your shoes, ankles, legs - all over. Aiming is something all Japanese women and men around the world have learned, but we western women just have no clue how to pee properly.

That's a lesson I learned the hard way when I had to pee in the Sahara desert by the side of the road in southern Tunisia. No rest areas, and no cover. That wasn't the worst part. Only after I succeeded in making a mess of myself did Mr. Field Notes point out I should have peed on one of the scroungy looking "bushes." I don't know if I would have believed him though. Afterall, he was the one who tricked me into thinking the gizmo for keeping sand off the road was a freaking camel parking lot! 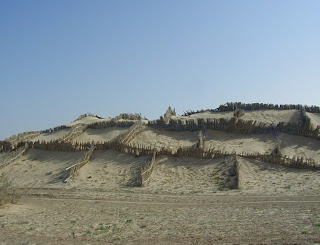 GAH! I grew up seeing the snow versions of them! He had me; he really had me. He is a major tricky head. You have to watch out.

Platform shoes are a must in Japan. I think they were invented there. 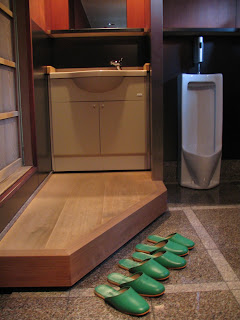 This is the prettiest bathroom I saw in Japan. It was at a Buddhist temple; I forget the name. All I remember is that it's the one with the perfect bell. I love the green slippers lined up. They're there so that you can cover your feet when you use the bathroom. In temples, you have to remove your shoes so it's really handy they set these out for visitors. I made sure the ones I used were lined up again when I was done.

In temples, gardens, and any place frequented by tourists, there is a ratio of about 8 Japanese squat toilets to 1 western style one. If you insist on sitting down, you might have to wait. Oh, and another great thing about the squat toilets is that the flush lever is at the floor so you can flush easily with your foot and be out of there without touching anything gross.

Western style Toto toilets made in Japan are fancy. They make American toilets look like we take craps in the Stone Age. Heated seats. Built in bidet, with customizable spray intensity and water temperature settings. Sanitizing seat dryer. Full flush and half flush. The price tag? $3,369.00 (and that's on sale) See more here. These toilets are standard in Japanese hotels. Most people in Japan, however, have squat toilets at home. As far as I can tell, having one of these Toto "washlets" at home is a real status symbol. By the way, some of the Toto Washlets will raise and lower the seat for you.

Here's a *very typical* cartoonish Japanese TV commercial for the Toto Washlet. You gotta see it. 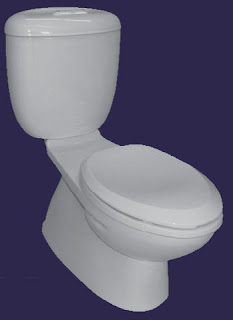 The Toto Washlets make my Australian toilet (at right) look like something from Roman times. The only special thing about it is it's full/half flush - and it's unfortunate brand name: Caroma. Seriously, they named their toilet c-aroma. It is a wonderful, environmentally responsible toilet. Even my dad is envious, and if you knew him, that says a lot!
Posted by Field Notes at 10:06 AM

I grew up peeing in the woods behind a tree and wiping with a leaf. Kenya squat toilets/outhouses were a breeze with that kind of training. Careful not to pee into the wind.

You are so right about squat toilets. For public peeing, I think they are FAR superior to our western ones.

it's a Jedi art - you've got to use the force :=) no really, hover with purpose? IDK it's an experimentation thing I'd say!