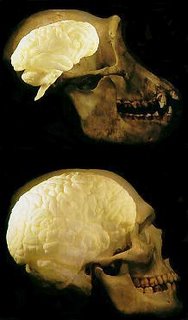 When I read scholarly articles that challenge commonly held theories, I wonder whether scholars will embrace the new theories and actually test the hypotheses they propose or will they dismiss the new theories out-of-hand based on some superficially valid reasoning without stepping up to test them or at least deeply consider them?

There are two such theories that hit the press this week: the snake one I posted about earlier which challenges the prevailing theory of the evolution of binocular vision (visual predation) and, published in the same journal as the snake paper, one about the evolution of large primate brain size that I hope extends Dunbar's sociality theory.

I haven't heard the scientific buzz about these new theories, but will be interested to see how well-received they are. A Christian blog poked fun at it after having seen the news story on Fox.

Will the result be belief perseverance, holding to one's beliefs despite evidence to the contrary, a phenomenon psychologists have noted and that 'young-earth creationists' suffer from? Or will scientists read the papers and re-evaluate the cherished theories? Whatever happens, I can only say that papers like this prompt good teachers to revise lecture notes. Perhaps the scientists who suffer most from belief perseverance are the same ones who use lecture notes yellowed from years of use. They must be members of The Flat Earth Society.
Posted by Field Notes at 11:40 AM