Last night's episode of Grey's Anatomy depicted a patient who underwent a "corpus callosotomy" and then was unable to identify his wife, baby, and a simple object in the room (a cup placed in front of him).

This didn't jive with my understanding of the effects of the procedure, also called a "split brain" operation in psychology. It's a topic that gets brought up in intro psych classes because severing the corpus callosum (a bundle of neurons that connexts the two hemispheres of the brain) produces very interesting side effects that stem from the lack of coordination between the two halves of the brain. It provides a neat case study for understanding how the hemispheres work and also showcases the concept of lateralization - the idea that some functions (such as language) are "specialized" and carried out on one side of the brain.

As the show correctly implied, a split brain procedure is done to treat severe seizures. Cutting the nerve bundle limits the spread of the seizure to the whole brain and greatly reduces the severity of the tremors. It can be done in two stages - the first cutting only the front two thirds of the fibers, leaving the rest intact so the the hemispheres can still share some information. If the seizures are still problematic, the rest of the fibers can be cut.

A full corpus callosotomy creates some interesting side effects - but not the severe one depicted on the show of not being able to identify anything.

person is left hemisphere dominant for language). The patient would have to close the right eye completely for this to happen. In laboratory tests, split brains look at objects through a tachistoscope that presents information to only one hemisphere or look at image that is flashed briefly to one side of the visual field.

A left hemisphere language dominant "split brain" who viewed an object (spoon, as in the diagram) with only the left visual field would not be able to identify it because that visual input is received by the right hemisphere which can't communicate with the left hemisphere where speech is generated. The person would recognize the spoon but be unable to say it. If asked to pick up the object with the left hand (which is controled by the right hemisphere, the one that saw the object) out of a collection of objects out of sight, the person would correctly pick up the spoon.

These kinds of effects don't usually cause problems for the person because information comes in through both eyes!!!

That's where Grey's Anatomy only captured half of the story. They dumbed it down considerably and even played up a seriously dumbed down version of the brain lateralization story. "McDreamy" the brain doctor said, in explanation of the patient's side effects, that it will take a while for emotional messages to travel to the other side of the brain where information is processed.... or something like that. I wanted to gag.

Anyhow, if you'd like to learn more about split brains, the study of which won Roger Sperry the Nobel Prize for medicine, check out this cool site:

A split brain game you can play.

One of the things that helps to understand, on a deeper level, why the split brain person experiences these weird side effects is that the eyes are connected to the hemispheres in a really unsual way. 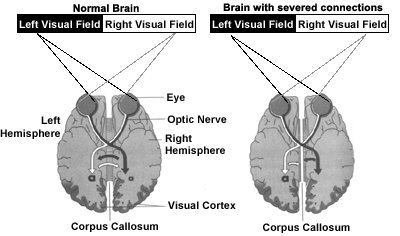 The right half of each eye's retina projects to the right hemosphere (shown in dark grey in the diagram above) while the left half of each retina (white) projects to the left hemisphere. Also, half of the retinal fibers (the nasal halves, closest to your nose) cross over to the other hemisphere at the optic chiasm. This means that the temporal halves (the right side of your right eye and the left side of your left eye) don't cross over at all. Your nasal retinal halves can be completely blocked and you'll still have a full field of view because the temporal halves cover the whole field. If you don't believe me or the diagram, hold three fingers right in front of your nose.

I could deliver an emancipation proclamation of the the evolutionary reasons for this weird set up, but suffice it to say that this arrangement allows us to have excellent depth perception.

It also means that a split brain person only receives information that can be verbally identified by one fourth of the available retinal area - the quarter that projects to the right visual field which is on the left side of the left eye (shown in white in the diagram). Notice those fibers don't cross to the other hemisphere; they are the ONLY fibers that project straight back to the left hemisphere. So, only information presented to the right visual field can be verbally identified.

All of this makes me wonder - is the optic chiasm cut during the corpus callosotomy and if so, does the person lack depth perception?

I assume it is cut because all of the textbooks on the subject present the fancy little images of the right and left visual fields and the projections to the nasal and temporal halves, but the side effects would be the same if the retinal inputs could cross over because the two retinal halves would see the same thing. In that case, the brain could still compute the difference in distance from the right and left eye's inputs and triangulate the distance.

Anyhow, that's probably more than you wanted to know about why I thought Grey's Anatomy flunked last night in the way they presented the split brain patient. It's great - I'm glad they did. Maybe somewhere out there someone taking intro psych watched it and realized the same thing I did and actually asked their psych prof about it later.
Posted by Field Notes at 2:57 PM

Evidently the optic chiasm has to be cut separately for binocular vision to be affected. See for reference:
http://www.springerlink.com/content/l665425025804825/#search=%22corpus%20callosotomy%20optic%20chiasm%22

They are still perceived, but the person can't actually say so.

That's was so weird and really cool about this particular condition!

Yeah, the optic chiasm is at the base of the brain, way below the corpus callosum, so if you were cutting the corpus and the optic you would have to go much deeper and cut through too many important subcorticals structures.