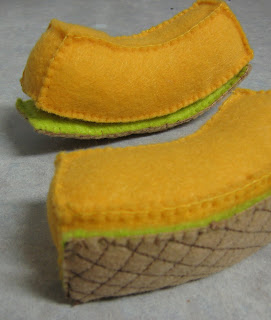 Ha! Here is my stroke of felt food genius - a piece of cantaloupe with rind that can be sliced off. The peel is held to the fruit by magnets that are completely concealed. I use the tiny but super strong neodymium ones. They are also lightweight. (Okay, in all honesty, it was Mr. Field Notes who suggested a fruit slice with removable peel. He's smart, too. It's just that usually he takes my good ideas and makes them even better, not the other way around. But the funky crust and cantaloupe part was all mine, neener neener. (We're not competitive with each other at all, the Mr. and I......)). Yeah, so enough about us — onto the cantaloupe.

So, this project is one you can do yourself - choosing either the easy route (not peelable, no magnets) or the harder one. I've included a pattern down at the end. 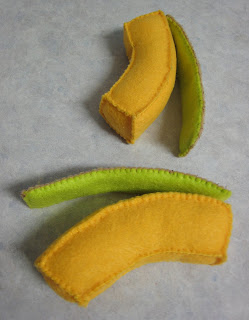 It really helps if you can use a sewing machine to make the criss-cross brown stitches for the outer peel. It would be a big pain to hand embroider, but could be done. I get the felt in 8x11 inch sheets for 20 cents each at my local JoAnn's. I found really small, thin neodymium magnets for sale on etsy and used those for this project.

You can click on the pattern below and save it to print out and use to cut your own felt pieces. If you don't want to make a hidden magnet one that peels, you won't need the wider strip in orange, just the one in tan and the narrower one in orange. You can also use velcro instead of magnets. 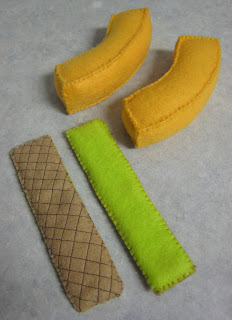 I hid the magnets completely by sewing them in place between two pieces of felt, cut slightly narrower than the outer layers they hid behind. Basically, I sewed a little basket/nest of thread around them to hold them in place - at the top, middle, and bottom of the peel and the bottom of the fruit slice.

The hardest part is making sure the three magnets in the peel meet up just right with the three in the fruit. Even when they are oriented to attract each other, if they are a smidge out of alignment, they won't hold the peel and fruit together neatly. I used the force of the magnets to guide me.

I made an interior panel to hide the magnets in the peel by sewing three magnets inside little nests of thread in three places (top, middle and bottom) between two pieces of felt that I cut slightly narrower than the outer pieces of the peel that you actually see (the green and tan). Then I sewed this in between the green and tan piece. Next I made the interior panel for the magnets that are hidden in the fruit. I laid one of the interior orange strips for the fruit on top of the lime green side of the finished peel. I laid a magnet on top of that close to wherever the magnet was in the peel. If you get close, it will just slide into place, attracted by the magnetic force. Then I put the other interior piece of orange on top of it and picked up the magnet with the two pieces of orange felt around it and then fixed the magnet into place by sewing a network of thread all around it. I repeated this for the other two magnets in the peel.

I've admired a lot of felt food for sale on etsy and have never seen anything like this before, so I think I have something unique here. There are loads of other possibilities with this general style and technique, too. Watermelons, oranges, apples — just about any peelable fruit. Cool! And, more fun for a little one =D 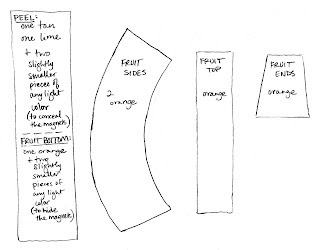 Clementine oranges! They would have peels and sections. Just make sure the Newfs don't eat the magnetic food. ;)

That is such a great idea! thanks for sharing!

So cute! I'd love to see your future fruit attempts.

This is such a cute idea!

Wow! Magnets! What a cool idea! My hubby is a chemistry PhD and LOVES to play with magnets, so we have lots. I already finished tomorrow's "highlights" post, but I'm going to put this one in the next one in a week or so when we have more links. Thanks!

Your cantaloupe slices came out great!! What a cool idea! I need to make some for my daughter - I know she'd get a kick outta playing with them!

Come share your creation at my party: Thursday's Treasures later this week!
http://treasuresfortots.blogspot.com/search/label/Thursday%27s%20Treasures

Hi...I'm Laura from Italy! I love your blog! I also made felt food and I'd like to invite you to visite also my blog :D

What an awesome project. I love that it is peelable. Thanks for this fantastic tutorial! I'd love for you to link this (and any other felt projects you'd like to share) up at my Felt Food Roundup on OneCreativeMommy.com. I hope to see you there!